Saints Foundation’s Paul Hedges was recognised for his work helping the people of Southampton live healthier, active lives, including founding the Senior Saints programme for over 65s.

Last week saw the Premier League Trophy take a trip to Southampton, visiting the south coast city as part of the top flight’s ongoing 30th anniversary celebrations. In the first of two stops, the trophy visited one of Saints Foundation’s Senior Saints exercise classes, where the charity's ambassador Francis Benali was on hand to deliver a special surprise to one member of the Foundation team.

Paul Hedges was named as Southampton FC’s Community Captain in recognition of his lifelong dedication to improving the health and wellbeing of local people, including the creation and development of the Senior Saints programme. Since its inception in 2015, Senior Saints has grown to support more than 300 of Southampton’s older people every week, and is made possible thanks to funding from the Premier League Charitable Fund and National Lottery Charitable Fund.

Benali presented Paul with a PL30 Community Captain’s armband and pennant at the start of the session, before both joined Senior Saints participants in a circuit exercise class in front of the trophy.

Paul Hedges, Saints Foundation Health Projects Manager, said: “I love the job that I do and it’s an absolute pleasure to do it, but to be rewarded and seen as a Community Captain for the work that I do is amazing. But most of the plaudits have to go to the team that work with me, because I couldn’t do this on my own. Together we make this important work happen.”

Jenny Legg, Senior Saints participant, said: “Paul is an inspiration, not just to us as participants but personally as well. He’s always there to give you a friendly word, bit of support, and he works extremely hard to put together the exercise and projects he does for us."

PAUL IS SOMEONE THE ENTIRE foundation LOOKS UP TO.

Sam Fulling, Saints Foundation Manager, said: "Paul is a real leader for our Health team. He's someone that the entire Foundation looks up to – he's someone who uses a huge amount of experience and also empathy in order to support everyone."

The PL30 Trophy Tour has seen Community Captains named at clubs across England and Wales, celebrating the Premier League’s world-leading financial support of £1.6 billion for local communities and the wider game.

Check back soon to find out what happened when the trophy made a second stop right in the centre of Southampton to visit our newest programme, Active Through Football.

how the pl support saints foundation 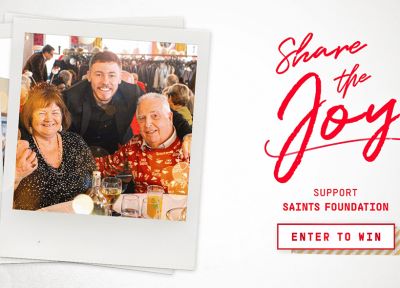 The action in photos from a dominant night at St Mary's