A look behind the scenes at when we unveiled our new shirt to Saints Foundation participants.

We've been overwhelmed by the reaction to the Saints Foundation limited edition shirt, which was worn in Saints' victories over Coventry City in the FA Cup and Hashtag United in the Women's National League Cup to raise money and awareness for us as we celebrate 20 years of transforming lives in Southampton.

In the build-up to its official unveiling, we decided to give four of our inspirational participants a sneak peek at the shirt – Amelia (SaintsAbility), Jenny (Senior Saints), Blayne (Saints Works) and Nick (Saints4Sport).

We welcomed them to St Mary's Stadium for a very special photoshoot which put their stories at the centre of this campaign. ITV News Meridian spoke to Amelia and Jenny about the support they've received from the Foundation, and what it meant to model this shirt like Saints James Ward-Prowse, Tino Livramento and Sophia Pharoah.

Jenny, Senior Saints participant said, "It was during the lockdown I lost my husband, and it helped tremendously to go out and meet people. During the lockdown, we had Zoom lessons, exercises and also quizzes, which was of immense help to myself." 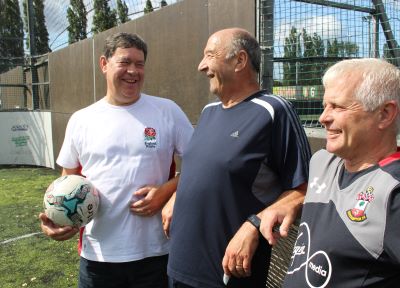