10 primary schools from across Southampton took part in Show Racism the Red Card’s workshops last Friday, with pupils learning what is considered racist abuse, how it makes others feel, and how they can support others who are being discriminated against.

The children then had the chance to ask their questions about race, diversity and tackling discrimination to a panel made up of ex-Saint and Show Racism the Red Card ambassador Ken Monkou, Saints Foundation Community Champion Dan Mason, and Chair of the Women and Equalities Committee Caroline Nokes MP.

The day was rounded off with a video from current players in Southampton’s First Team and Women’s Team speaking about their experiences of discrimination and encouraging the young people to take a stand against racism in their society.

Pupils from each school added statements against racism to Premier League Primary Stars Kindness Wall, inspired by the Manchester mural of Marcus Rashford which was covered with a collage of supportive messages earlier this year after it was vandalised with racist abuse following the EURO 2020 Final.

Saints Foundation's Premier League Primary Stars Coordinator, Tim Stevens, said: “It’s been great to come together with so many primary schools from across the city on such an important issue. It's vital that we communicate that there is no room for racism in football or anywhere as early as possible.

“Understanding diversity and encouraging conversations about the right way to approach difference is hugely important for our young people to become better allies to anyone who discriminated against. I’d like to thank Ken, Dan and Caroline, and the players who sent in messages via video, for speaking so openly and honestly at the event.”

no room for racism

Show Racism the Red Card is the UK's largest anti-racism charity. They provide educational sessions to more than 50,000 individuals per year. Find out more about the charity below. 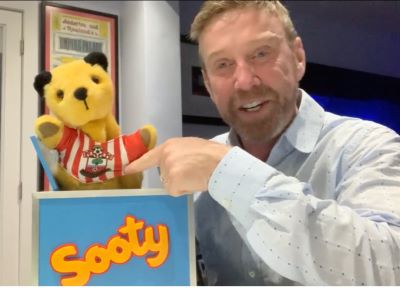 Bucket collections at this year’s pantomime will raise money for the charity of Southampton Football Club.

Wed 17 Nov
Bid for a Saints Poppy Appeal shirt Saints Foundation: 'Who we are'