Since 1948, Treeve Sedgemen has followed Saints avidly, taking up the same seat in the Kingsland Stand ever since St Mary’s was completed in 2001.

For him, the Covid-19 pandemic has hit hard, not only is he unable to support the club he has followed for more than 60 years but it has left him isolated, needing Saints Foundation to step in and help deliver his medication through the Prescription Delivery Service, supported by Southampton City Council and NHS Southampton’s Clinical Commissioning Group.

To celebrate his 80th birthday, Saints Foundation invited him onto a call with the man who led Southampton to FA Cup glory in 1976, Lawrie McMenemy.

The call coincided with the announcement of the former manager as an official Ambassador of the charity with the pair taking a trip down memory lane, speaking about their favourite memories of the club as well as the positive impact the Foundation has had on Treeve.

Watch the best bits of that call below.

Click here to see lawrie talking about his new role 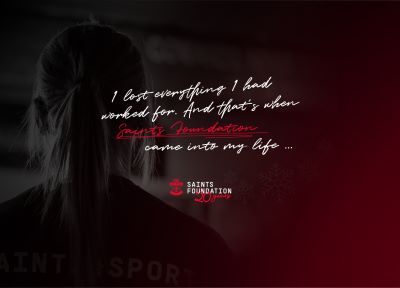 How Saints Foundation saved my life

This Christmas, Saints Foundation is appealing for donations to continue their work in the community. I wanted to tell my story to you directly, to share first-hand how your donations can completely change – and even save – someone’s life.