Saints fell to a 3-0 deficit at the break before fighting back through Ryan Seager in the second half, and Jaïdi felt the encounter was an archetypal game of two halves.

“If you saw the result you would think we had a poor game,” he explained.

“But it really was a game of two halves. Yes, the first half was too slow, with too many mistakes and we conceded sloppy goals.

“But the second half was amazing in all aspects. We stepped up the level and ran them over – we created a lot of good chances.

"My question to the boys was why couldn’t we do that in the first half? It’s frustrating but it was good to see such a second-half reaction.”

Seager netted his second goal since returning from long-term injury on 58 minutes, as he tucked home the rebound from his saved spot-kick.

The second half also saw forwards Marcus Barnes and Olufela Olomola gain their first minutes back since injury, as the duo replaced Harley Willard and Seager respectively.

“And then added Olufela to the front three. But he couldn’t finish the 90 minutes so we tried to give him as long as possible.

“Olufela and Barnes made a good impact to the team when they came on. You could see the difference, so hopefully in the next game we can give them more time.” 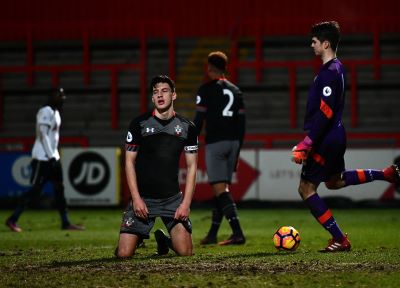 Southampton’s Under-23s were beaten 3-1 by their counterparts from Tottenham Hotspur in Premier League 2 on Monday night.

Mon 30 Jan
Seager: I am feeling back to normal Jaïdi: We expect a big challenge