Southampton Under-23s striker Olufela Olomola is targeting a consistent start to the Premier League 2 campaign after playing and scoring in the team’s opening-day win at Liverpool.

Saints head into their second game of the new league season on Monday evening when they host Manchester United at St Mary’s (kick-off 7pm BST), and Olomola hopes he has done enough to keep his place in the starting eleven.

The forward bagged two goals in the 4-1 win at Liverpool last weekend where he played for 80 minutes at Prenton Park before being substituted.

“It’s always good to score, but first and foremost it’s all about getting a win for the team,” he told youtube.com/southamptonfc.

“It’s always nice if I can contribute with a goal too,” he added.

“For a striker or any attacking player it’s all about getting a run of games and getting some sort of form, so getting that first goal always helps to build confidence.

“Hopefully I’ve done enough in training and in matches to show that I should be in the team again.”

Manchester United were 1-0 winners in their opening game against Leicester City last weekend, as they started the defence of their title with a victory that they will look to add to on Monday.

“I’m looking forward to it a lot,” said Olomola. “It should be a good game, we played them last season and we won 2-1 so hopefully we can do the same again.

“We worry about ourselves though, and we don’t really look at the opposition. We know that United are going to be a strong team and we know that they’re going to be good on the ball with good individual players, but we focus on ourselves and what we want to do.

“I think we started off well (against Liverpool) and that was the key thing,” he added. “That’s why we pushed on and did so well and scored so many goals. We were clinical in the final third but we could have got more. The chances that we had we took, and that was the main reason why we won.”

Olomola featured in all of the forward positions in a front three during pre-season, as well as getting some training time with the first team, which has left him with some clear targets for the weeks and months ahead.

“I feel I work well with all of the players in the team whether they’re starting or come off the bench, I think we’ve all got a good relationship in this under-23 side,” he said.

“I’m just trying to kick on now and score more goals for the under-23s, establish my place in this team and hopefully impress the first team manager.

“I spent quite a bit of pre-season with them and I learned a lot by being in and around the first team environment. It really opened my eyes to the standard and the level they’re at and where I need to improve to get to that level.” 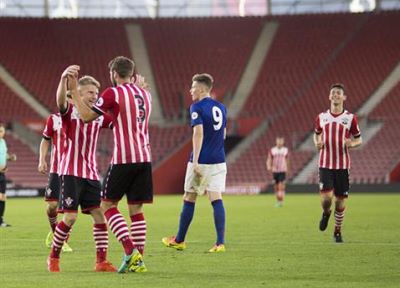 Take a look through Naomi Baker's images from Southampton Under-23s' 2-0 win against Manchester United in the Premier League 2.

5 hours ago
Video: Access all areas against Leeds U18 Highlights: Saints 3-3 Villa