Three second half goals from Chelsea made it back-to-back defeats for Southampton from two trips to the capital.

A 2-0 reverse at league leaders Arsenal eight days prior saw Saints punished for their mistakes, but there was little they could do about the quality of finishing from Chelsea, who inflicted only a third loss of the campaign on the visitors.

It was looking like a different story after the opening 45 minutes at Stamford Bridge as Saints couldn’t have got off to a better start in this contest with Jay Rodriguez slotting home with just 13 seconds on the watch as he took full advantage of a miscued pass from Michael Essien, to give Southampton a perfect platform in the game.

Both teams had the opportunity to go as high as second in the table with a win, and with Saints’ fine defensive record keeping them in good stead going into the half-time break, few might have bet against the visitors holding onto their lead.

However, under Jose Mourinho, Chelsea boasted an impressive 66 home league match unbeaten record prior to this contest, and in the second half, they put Saints to the sword with strikes from Gary Cahill, John Terry and substitute, Demba Ba to mark a resounding comeback.

The loss of Artur Boruc to injury at 1-1 compounded matters for the visitors, though replacement Paulo Gazzaniga stood little chance with the efforts that went past him in the last half an hour.

Saints had gone on to win each of the last six league games they had taken the lead in, but remain with just one win on their last 12 league league visits to Stamford Bridge.

Mauricio Pochettino made two changes from the team that was defeated by Arsenal last time out. Dejan Lovren returned after illness to partner Jose Fonte in the centre of defence. That meant Jos Hooiveld dropped back to the bench.

Dani Osvaldo was also drafted in from the start at the expense of Rickie Lambert - who also began his last game at Stamford Bridge on the bench - and came on to score a second half goal.

Ex-Chelsea man Jack Cork was back amongst the substitutes, but club captain Kelvin Davis missed out again with a knock.

The hosts recalled Juan Mata and Michael Essien into their midfield, with Fernando Torres leading the line.

Saints won the toss and elected to take kick-off towards the Matthew Harding stand lining up in their red shirts, red shorts and striped socks on a mild December afternoon inside Stamford Bridge.

And they took full advantage of their focused opening to the game. Having played the ball out to the left, the pressure told on Essien, whose attempted backpass to goalkeeper Peter Cech, instead fell invitingly for Jay RODRIGUEZ to pounce, as he slotted home with a first time finish past the Chelsea glovesman after just 13 seconds of play.

A stunned Chelsea side quickly sought to redress the balance, but found it hard to break through the assured looking Saints backline. The pulsating start to the contest continued when the hosts won a corner which England defender Gary Cahill headed wide, as the visitors showed they were able to ride the expected storm of response from Jose Mourinho’s side.

The exciting start to the contest continued into the tenth minute of action until a brief stoppage in play as Osvaldo received treatment for an elbow he took to the face from Cahill. The Italian was deemed okay to carry on and he was soon back in the thick of the action to win Saints their first corner of the match as he tricked his way to the byline.

A couple of contentious decisions awarded by referee Michael Oliver infuriated Saints as they were penalised for a foul on Ramires which was not too dissimilar to one made on Luke Shaw moments earlier, but the Blues almost further increased the punishment when Brazilian midfielder Oscar connected with a powerful strike that Boruc had to save and then beat away from the path of any on rushing Chelsea players.

After further pressure from the hosts, Saints hit back with another couple of set pieces, the latter of which was awarded for a foul by Ramires on Lallana in the 25th minute. Ward-Prowse struck a vicious curling effort which just clipped wide of the near post that Cech was scrambling across to, as the Blues were given a let off.

A correct offside call on Mata was followed up by another on Essien who headed over. Then, in the 33rd minute, the Ghanaian’s difficult afternoon continued when he was booked for being found guilty of taking a dive as he looked to get the better of Schneiderlin in midfield.

A foul by Cahill on Rodriguez in a similar position moments later provided Ward-Prowse with another opportunity to put in a dangerous delivery, but an offside call against Lovren quickly ended that move.

The game was brought to a brief stop again when Wanyama and Oscar each required treatment for separate incidents inside either half, and on the return to action, Lallana went close to finding a way through as he received Ward-Prowse’s clever cutback, only to bring the ball onto his weaker foot with which he dragged the ball wide.

Oscar then went close at the other end with a header from a Fernando Torres cross that Brouc got down smartly to save low to his right.

That proved to be the last taste of the action for Oscar, who was withdrawn in favour of Frank Lampard with three minutes still to play in the opening half.

Lampard was next in line to try and finish well put together move that saw Hazard and Mata combine to cross for Torres, whose header was brilliantly clawed away by Boruc and then taken off the Chelsea substitute’s feet as he tried to turn home a rebound.

Four minutes were added on for stoppages, but no further chances were created as Saints held their narrow advantage going into the break.

The Blues made their second switch over the interval with Demba Ba replacing Essien, as Chelsea freshened up their attacking options, to try and open the game out further.

They almost stole an early march too, when Torres cut inside to shoot, but Wanyama was there to make a crucial block which denied the forward from working Boruc.

Saints defended stoutly in the opening exchanges of the second 45, but were tellingly, composed in possession too, as they remained unruffled by the more physical nature of the game that was starting to creep in across the pitch.

Clyne’s foul on Torres provided Lampard with a range-finding attempt from a free-kick in the 54th minute. The midfielder had Boruc at full stretch to keep out the effort, but the resulting corner, led to Chelsea’s leveller.

Lampard’s delivery from the right was headed goalwards by Ivanovic, and almost diverted in at the near post by Demba Ba, but the post kept out the close range effort and CAHILL was able to nod home from close range to restore parity.

In the aftermath of the equaliser, it became apparent that Boruc, who had collided with the post in trying to keep out Ba’s effort, was no longer able to carry on through injury.

Boruc was replaced by Paulo Gazzaniga before the hour mark, as the former Gillingham man returned for his first Premier League match since a defeat at Liverpool last December - a year ago to the day, in fact.

The Blues sensed an opportunity, and sadly, for Gazzaniga, his first touch of the ball required him to pick the ball out of the net as Chelsea’s resurgence resulted in a second goal on 62 minutes. Mata’s cross was met perfectly by John TERRY who looped a fine header into the top right corner, which the substitute ‘keeper stood little chance of getting to.

James Ward-Prowse made way for Steven Davis as Saints acted quickly to get a foothold on the game again.

And, on 67 minutes after Schneiderlin had been booked and then took a knock for his troubles, the Frenchman made way for Rickie Lambert, who moved alongside Osvaldo in attack, with Rodriguez staying out wide.

Rodriguez followed Schneiderlin into the book after saying too much to the match official Michael Oliver, whose decision to punish Steven Davis for a routine challenge, had angered the frontman.

Chelsea had a great chance to effectively seal a win when Ba broke free on the left to fire across goal, with his effort flashing wide of the right post.

Ramires was the next Blues player to require treatment after coming off worse in a tussle with Lovren, but was soon up on his feet again to play on.

The hosts created another chance when Torres headed Ivanovic’s cross wide, and the on rushing Ba was unable to rescue the ball as Gazzaniga remained largely untroubled.

As play entered the final ten minutes, Lambert put a teasing delivery into the Chelsea area which Osvaldo and Lallana were so close to connecting with, but Cech gathered gratefully.

Back inside the Saints area, Fonte made a timely block to deny Hazard who had collected Mata’s inch-perfect through-ball, but couldn’t force his shot on target thanks to the Portuguese defender.

Jon Obi Mikel replaced Torres in Chelsea’s third and final substitution on 84 minutes, before Osvaldo was the third Saint to go into the book for a lunge on Mata inside the Blues’ half.

With the clock ticking down, Osvaldo hooked Clyne’s cross towards the top left corner of Cech’s goal, but the goalkeeper watched it all the way as the ball just dropped out of play.

Osvaldo followed up with another attempt a minute later, but his fierce drive from Shaw’s pass, cleared the crossbar.

Saints’ fate was sealed in the 90th minute when Ramires took the ball out to the left flank and crossed low for BA who slid home a measured effort inside the near post for 3-1.

Six minutes of additional time were added on, during which, Saints were unable to find another way through, as they lost by a two goal margin for the second time in as many games. 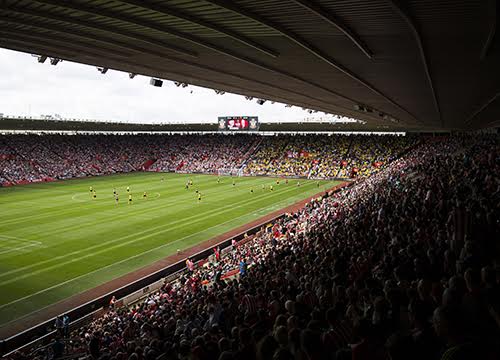